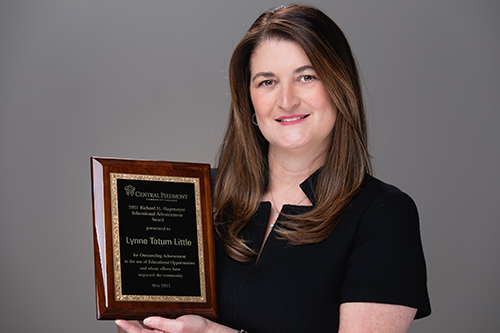 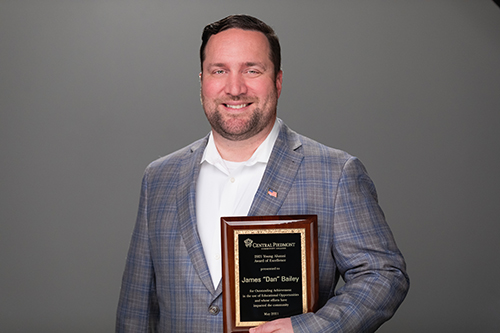 During its spring commencement on May 16 at 10 a.m., at Bojangles' Coliseum, Central Piedmont Community College will present Adam S. Brooks, senior manager of learning and development for Charter Communications, with the 2019 Richard H. Hagemeyer Educational Advancement Award, and Brandy R. Garrett, science department chair for Blenheim Elementary Middle School, in Bennettsville, S.C., with the inaugural Young Alumni Award of Excellence. The awards recognize a former Central Piedmont student who has benefited significantly from experiences at Central Piedmont and whose efforts have helped the community.

Adam S. Brooks
Brooks graduated from Central Piedmont in 2004 with an associate degree in business administration. Since that time, he has built a successful career, working in a variety of fields, including instructional technologies, training management, new media communications, marketing, and many others. A consummate servant leader, Brooks seeks to place the needs of the local community first. As a result, he can be found volunteering on a number of boards for area nonprofits and economic development teams, including the Matthews Economic Development Advisory Committee, The Red Brick Partnership, and The Armed Forces Museum and Archives of the Carolinas, or helping Charlotte men in need by gifting them a pair of quality, vintage dress shoes that he personally restores through his shoe ministry. A passionate entrepreneur, Brooks is a frequent guest speaker, writer, and contributor who has founded a number of community events in the Queen City that highlight innovation and startups, including THE Geek Fest at Central Piedmont, BarCamp Charlotte and EdCamp Charlotte.

Brandy R. Garrett
Since graduating from Central Piedmont in 2009 with an associate in arts, Garrett has earned a bachelor's degree in psychology from UNC Charlotte, and a master's degree in education from Francis Marion University. Today, she is married, a mom to five children by adoption, and a proud middle school teacher, who works to ensure the in-need children she teaches are well loved. She routinely raises money for her students, to guarantee they have the supplies they need to learn, and was among the first to raise her hand to help those impacted by Hurricanes Florence and Michael in fall 2018. Her commitment extends well beyond her classroom; in fact, each year she returns to Central Piedmont to volunteer at the college's annual Phi Theta Kappa induction ceremony, an event that honors the academic achievements of current Central Piedmont students.

The Hagemeyer Award takes its name from Dr. Richard H. Hagemeyer, CPCC president for 23 years, who led the college from its beginnings as a trade school with 1,200 students to one of the largest N.C. community colleges. View the previous award recipients at cpccfoundation.org/alumni/hagemeyer-award-honorees. To learn more about the Richard H. Hagemeyer Educational Advancement Award and its requirements, please visit www.cpccfoundation.org/hagemeyer.

This is the first year the college has awarded a Young Alumni Award of Excellence. To be considered for the award, the recipient must not only meet all of the Hagemeyer Award requirements, but also must have graduated from Central Piedmont within the last 10 years. To learn more about the Young Alumni Excellence Award, visit www.cpccfoundation.org/youngalumni. Read more

Do you know a Central Piedmont Community College graduate who is making a tremendous difference in the community? Nominations are currently being sought for the 2019 Richard H. Hagemeyer Educational Advancement Award and the 2019 Young Alumni Award of Excellence. These awards recognize Central Piedmont graduates who has significantly benefited from his/her experiences at Central Piedmont and whose efforts have helped the community.


The college will recognize this year's winners at Central Piedmont's commencement ceremony on Thursday, May 16, 2019, and a one-year scholarship will be granted to a Central Piedmont student in an area of study reflective of the winner's background.